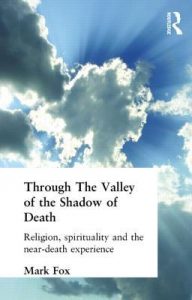 “Since the phenomenon, I have had a sense of belonging, as if I were related to every rock, tree, flower, mountain, cloud, animal and person. I am truly concerned about them and I feel a great love for everyone and everything in the universe. In other words, I am in attunement with my world, which is the whole world.”

– Testimony of a Near-Death Experience survivor

Whether resuscitated in the Emergency Room, struck by lightning or rescued at sea, people snatched from the jaws of death frequently report uncanny or otherworldly phenomena. Survivors of these mystifying voyages repeat the same familiar stories – of tunnels and paradisal gardens, encounters with an all-loving light, and heavenly (or sometimes hellish) visions. Where do people go during these encounters? What do they see? Why are their remarkable stories so often correlative? Are they persuasive evidence of life after physical death?

Through the Valley of the Shadow of Death: Religion, Spirituality and the Near-Death Experience is a dramatic and sustained response to decades of research into Near-Death Experiences (NDEs) and the first to credibly bridge the gap between the competing factions of science and spirituality. Drawing on the latest scientific and psychological research within a framework of theological and philosophical argument, it asks what NDEs can and cannot tell us about God, the afterlife and the meaning of human existence. Is the NDE a genuine glimpse of the afterlife or simply a chemically-induced hallucination? Can it offer realistic hope of immortality? What should we make of the fantastical claims of some near-death returnees such as the congenitally blind who report having found themselves temporarily able to see during their NDEs for the first and only time in their lives? Can science adequately refute theological interpretations of NDEs in the absence of convincing medical explanations, and are religion and science necessarily in conflict?

Drawing on the unpublished testimonies of almost 100 NDE survivors gathered over thirty years, and including a full overview of a broad range of major theories and controversies, this scrupulously researched book is the only complete and up-to-date introduction to a subject that defies conventional understanding. Neither a religious argument touting NDEs as hard evidence of God nor a scientific rebuke washing them away, its balanced investigation of these much-reported yet baffling phenomena brings fresh urgency to the study of our hopes for a life beyond.

“Fascinating…the analysis/explanation, drawing on cognate research into religious and mystical experiences, is of a sophisticated order…clear, lucid, engaging and to the point. Highly recommended!”

“Enclyclopaedic and scholarly; it pushes the boundaries further than any work on this topic in the last few years…There hasn’t been anything quite like this for a long time.”

Available in print and kindle formats from Amazon.co.uk: