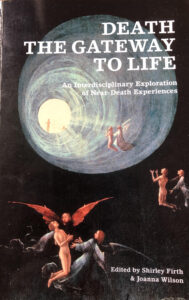 This engaging collection of essays is based on papers presented at the conference Is Heaven for Real? Significant Implications of Near-Death Experiences which took place at the University of Winchester in 2016. Eschewing reductionistic, brain-based ‘explanations’ of Near-Death Experiences (NDEs), it aims, instead, to present a series of explorations and interpretations of such experiences focussed on their meaning and spiritual implications. To this end it explores issues to do with the nature of death, the essence of consciousness, and the pastoral implications of NDEs. En route, it also considers the fruits produced in subjects lives by their NDEs and examines the theological and philosophical implications of such experiences.

The structure of the book reflects its objectives. Part I, ‘The Nature of Consciousness’, includes three pieces examining what NDEs might be telling us about consciousness itself. Pim van Lommel provides an excellent overview of the detail and conclusions contained in his seminal study Consciousness Beyond Life, asserting that NDEs contribute to an understanding of consciousness as something that can exist apart from the brain before concluding that “consciousness seems to be our essence” and that “once we leave our body [sic]…we exist as pure consciousness, beyond time and space…”  Peter Fenwick examines NDEs within the wider context of End of Life Experiences (ELEs), drawing on some vivid and frequently moving testimonies from his own existing studies of both ELEs and NDEs, whilst David Lorimer explores the ways in which NDEs may be seen to provide evidence in support of the concept of the ‘universal mind’.

In Part II, four equally able commentators examine some spiritual and religious perspectives on NDEs. Marianne Rankin explores the nature of NDEs within the wider context of the study of religious and spiritual experiences generally, and in so doing treats the reader to a fascinating overview of the history and aims of the RERC. Paul Badham shows convincingly how NDEs suggest evidential backing for the soul’s immortality, demonstrating how this ‘squares’ with religious – specifically Christian – views of the afterlife. Patrick Gaffney sets out detailed parallels between NDEs and Tibetan Buddhist understandings of death and dying and in so doing reveals how they align with the Bardo states within the Tibetan tradition, whilst Shirley Firth explores what NDEs might be telling us about death and what comes after, examining in the process the small but significant number of negative NDEs which have been reported in the literature.

The study is neatly tied up in an afterward by David Lorimer, in which he succinctly asserts one common finding that runs, thread-like, through the whole collection: the view that NDEs and related experiences challenge the adequacy and completeness of the currently dominant Western worldview of scientific materialism. The package is completed by a series of valuable appendices, in which a number of testimonies from well-known and not-so-well-known NDErs are set out in detail.

The ‘Further Resources’ are useful although the book would have benefitted from the inclusion of an index and there are a small number of printing errors which the publishers may see fit to amend in any future editions.

The conference from which this study arose was timed to mark the fortieth anniversary of the publication of Raymond Moody’s Life After Life: the book in which the author coined the term ‘Near-Death Experience’, thereby kick-starting the whole history of ‘Near-Death Studies.’ Death the Gateway to Life, despite its rather clumsy title, represents a valuable contribution to what is now a vast and growing field, and the reader will find much here to reflect upon. I enjoyed it, but would have liked to have seen a greater willingness to engage with the wider contexts of NDEs: contexts both historical and recent. There was no recognition, for example, that NDE research is but part of a long history of psychical and parapsychological study into life after death extending backwards well into the nineteenth century and which was well established long before Moody’s original research was done. How might that earlier research serve to locate the study of NDEs? How might it inform it? And how might recent and contemporary psychical research throw light on still unresolved issues within near-death research? I am thinking in particular here about how it has proved so difficult to obtain experimental veridical evidence that during NDEs and OBEs something actually leaves the body. Is this issue a ‘new thing’, or have we been here before? Casting the research net in other, related, directions might have proved fruitful and would certainly have been in keeping with the aims of the study. It has recently been done brilliantly by S. D Tucker in a ground-breaking study of poltergeists as Trickster phenomena. Might something similar be done with NDEs to equally beneficial effect? I was also rather puzzled by the chapter on NDEs within the context of the Hardy archive. Given that two studies of NDEs using that very archival material already exist, it was odd not to see them mentioned or referenced.

No matter. The study as it stands is important and timely and it is to be hoped that the next forty years of NDE research will be able to fill in some of the gaps in our understanding which currently remain. As things stand, Death the Gateway to Life has much to offer the specialist and interested non-specialist alike and I recommend it warmly, although not without reservation.