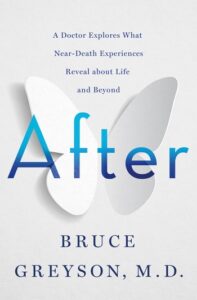 Bruce Greyson absolutely deserves the title of ‘pioneer’ within the history of the study of Near-Death Experiences (NDEs). His work in the field spans half a century, he was the co-founder of the International Association for Near-Death Studies (IANDS) in 1981, his more than twenty-five year editorship of the Journal of Near-Death Studies did much to reinforce the academic respectability of exploring the phenomenon, and his name will forever be associated with the ‘NDE Scale’ – sometimes dubbed the ‘Greyson Scale’ – by means of which the term ‘Near-Death Experience’ has come to possess a clear – if still sometimes contested – definition.

Given such an impressive CV it seems odd, then, that After is Bruce Greyson’s first, self-penned, full-length study of NDEs. After all, many of his fellow-pioneers – Raymond Moody, Ken Ring and Michael Sabom to name but three – have multiple studies to their names. By contrast, Greyson, despite a track record of outstanding contributions and co-contributions to the field, has hitherto not delivered what many of his peers have.

After changes all of that and it is both informative and fascinating to learn what a lifetime of studying Near-Death Experiences has taught its author. Hence, throughout 258 immensely readable and absorbing pages, we learn much: that NDEs are common experiences which can happen to anyone, that they transform lives in consistent and exceptionally meaningful ways, that they raise profound questions about the relationship of mind to brain, and that they offer the tantalising promise of the continuation of consciousness beyond physical death.

Greyson peppers his book throughout with some compelling case-studies and the exploration overall is wide-ranging. He examines a variety of characteristics of NDEs in impressive detail, including changes in time-perception, the life-review, out-of-body experiences, and the ‘being of light’, bringing to bear a wealth of insight into each one. He is at his best when detailing the psychological and existential changes brought about by NDEs – reflecting his background in psychiatry – and at his weakest when exploring the theological implications. Nevertheless, the spiritual ‘angle’ receives enough discussion to suggest that those better equipped than him to consider it have much to contribute to the debate, particularly in the examination of his assertion that NDEs might best be seen as physiological events which are at the same time spiritual gifts. This ‘double-sided’ aspect to the phenomenon raises profound questions which will be familiar to CFPSS members: not least the dangers of reductionism in examining the neurological correlates of such apparently transcendental events. There’s nothing new in this, of course, but After offers a timely reminder that we be on our guard when considering what neurotheology has to offer to ongoing discussions of the ‘roots’ of religious experience.

In fact, the ‘nothing new’ angle highlights my only real disappointment here. Nearly fifty years since Raymond Moody coined the term ‘Near-Death Experience’ in Life After Life, there’s nothing really new in After. The author does an outstanding job in summarising where near-death studies has been – and in describing his own role within it – but says little about where things might go now or how future research might be framed in order to provide answers to questions which still remain tantalisingly open. As an introduction to the field, After is exceptional, and as a summary of where the author’s own journey has taken him it is fascinating and compelling. Yet, almost five decades on from Raymond Moody’s first, ground-breaking, study we still await definitive closure surrounding some rather basic questions, including that of whether or not at the point of death something actually leaves the body. In this regard, Greyson makes a strong case for viewing the plural of anecdote as data, but says little or nothing about why after half a century of study anecdote remains all we have to base our NDE conclusions upon. Could it be right to examine such experiences in a completely different way, perhaps combining the study of NDE ‘data’ with that derived from within related fields such as those of parapsychology? As much as I enjoyed After, I was ultimately left with the feeling that it would have been a better book if the author could have devoted more attention to what might come after it.