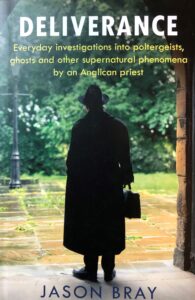 As he explains early on, one of the reasons why the author wrote this book was because of misrepresentation by a Sunday newspaper of a particular case in which he was involved: a kind of ghost/poltergeist ‘hybrid.’ Other press coverage followed, and he found himself, briefly, the subject of national attention. In setting the record straight, the Revd Dr Jason Bray takes the opportunity to introduce the reader to the role of a (High) Anglican deliverance minister together with his more general day-to-day priestly duties. It’s an engaging and enjoyable read, which I found at once both quirky and slightly unsettling.

As I’d hoped, the bulk of the book is taken up with the author’s own experience of the ministry of deliverance; although, as the subtitle reveals, ‘deliverance’ in this instance is extended to cover a variety of phenomena including poltergeist activity, ‘place memory’ hauntings, ‘true’ hauntings, ‘oppression’ and ‘possession.’ The reader may baulk at this rather neat categorisation but, as the author explains, it appears in large part as a result of a ‘massive amount of reading’ which accompanied his own participation in the Christian Deliverance Study Group.

Given the nature of its subject-matter, it may seem surprising that Deliverance takes the reader on a somewhat gentle amble through the author’s own encounters with the powers of darkness, but there is very little here that is truly frightening. Despite freely admitting to changing some details of otherwise ‘basically true’ events, Jason Bray resists the temptation to overdramatise and the result is a collection of cases ranging from the prosaic to the banal and the slightly odd. Deliverance certainly succeeds in demystifying deliverance ministry – another of the author’s obvious intentions – and would provide a good starting-point for anyone requiring pastoral guidance within a tricky field. It’s understated, undramatic, and sometimes funny, and whilst the uncertainty of the outcome of some of his interventions is a continual refrain, it is clear that overall the author’s ministry brings much comfort to those going through troubled times.

Deliverance is quirky and engaging, then, for sure. So why was I slightly unsettled by it? For one thing, I was rather surprised at the author’s failure to warn more clearly of the dangers posed by Ouija boards. Indeed, despite his claim, cited above, to have undertaken a massive amount of reading, he declares that he doesn’t ‘know much about them’ when ministering to a teenager clearly troubled that he might have inadvertently ‘let something through’ when playing with one. In describing the same ministry visit, the author states that he doesn’t have ‘strong views’ about Ouija boards, seemingly unaware of the mass of literature – including some extremely harrowing testimonies – which makes very clear that something highly troubling is unleashed into the lives of many who experiment with them. I also found his treatment of poltergeists rather puzzling. As he describes, one feature of many of his visits is what he calls the ‘poltergeist conversation’ in which he outlines to troubled subjects that the paranormal movement or destruction of objects that has troubled them is an outward physical manifestation of inner, hitherto repressed, feelings and emotions. This certainly is an oft-encountered explanation of the causes underlying poltergeist phenomena –  but it is by no means the onlyone. I found myself wanting to know: why did he choose it to the exclusion of any other? It is by no means uncontested; far less unanimously held. Given, by the author’s own admission, that this interpretation of the ‘mechanics’ underlying poltergeist phenomena was sometimes difficult to put across to those he visited, I wondered why he didn’t choose to share with them a range of other possibilities.

These reservations notwithstanding, I enjoyed Deliverance. As an insight into the day to day travails of a deliverance minister it works well, and it fills a need for a readable introduction to a complex subject. I am sure it will be of benefit to many: to those troubled by the manifestations it describes together with those tasked to deal with them.

This review first appeared in The Christian Parapsychologist, New Series, Vol 2, No 6, pp. 55-7