“Departures are all alike; it is the landfall that crowns the voyage.” – 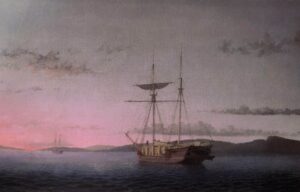 What is it like to die? And what might dying look like from the inside? Recently, such questions were given wide media attention when a newly-released scientific study showed that some thirty seconds before and after the heart stops the brain seems to undergo some interesting changes. In particular, the study, published in the journal Frontiers In Aging Neuroscience, pointed to perceived – indeed, measured – changes in the brain’s gamma wave activity: activity associated with memory retrieval.

How did such a discovery come about? In fact, it was somewhat fortuitous: at least for researchers. An 87 year-old man’s brain was already being monitored via ECG when he had a sudden and fatal heart attack. Examined later, the scan revealed unusual gamma wave activity at that point: activity indicative of a vivid episode of memory recall. In other words, the scan seemed to be showing that his life, metaphorically-speaking, might well have been ‘flashing before his eyes’ in the moments when his brain began to die.

Newspapers love this kind of story. In fact, the finding was picked up and reproduced far and wide, so it wouldn’t be surprising if some Reaching Out readers haven’t come across it already. And it’s hardly new. Historically, researchers such as Ronald Siegel and Susan Blackmore have sought to show that all aspects of so-called Near-Death Experiences (NDEs) are explicable in terms of brain processes: from the out-of-body experience right through to the tunnel, light, life ‘review’ and other features reported by many who have been to the brink of death before ‘returning.’ So when I read the latest piece I had more than a touch of déjà vu. What made it a little different this time round was that I found myself thinking hard about the implications.

On the one hand, the latest finding might be taken as providing reinforcement for the view that all mental activity is brain-based: up to and including the activity that takes place as the brain dies. Viewed in this way, a Near-Death Experience might simply be seen as nothing more than a kind of final, brain-triggered, ‘bed time story’: a notion long-promoted by researchers such as Siegel and Blackmore, cited above. This position is certainly reductive but also comforting – at least up to a point. After all, who wouldn’t want to go into oblivion surrounded by happy memories and a sense that the life-story continues? The problem with this view is that it reveals the dying person’s experience of approaching heavenly bliss to be nothing more than a cosy illusion; a product, perhaps, of evolutionary ‘re-wiring’ of the brain designed to transform the experience of death from final horror into something much more positive. For many – myself included – such a position leaves very many questions unanswered.

Perhaps, then, there is another way of looking at all of this: including the recent article that caused such a stir. Over the last few weeks I have been re-reading one of my favourite books by C.S Lewis: Prayer: Letters To Malcolm. It never seems to get quite the same attention as Lewis’s more ‘revered’ works such as Mere Christianity and The Problem Of Pain, yet it is full of the most wonderful insights regarding prayer and the spiritual life. It is unclear if Lewis knew anything about what we would today call ‘Near-Death Experiences’, but as I will seek to show, it is possible to build a bridge between what he wrote about in this book regarding mystical experiencing and those experiences undergone by persons at the very end of their lives. As we cross such a bridge, it is my hope that we may be enabled to see Near-Death Experiences in new ways: ways, perhaps, in which Lewis himself might have viewed them.

Key to building our bridge is Lewis’s recognition of mystical experiences as sharing something of a ‘common core’: albeit a somewhat limited core including the key motifs of emptying and departure. Thus, he writes, ‘what is common to all mysticisms is the temporary shattering of our ordinary spatial and temporal consciousness and of our discursive intellect.’ In other words, for Lewis, during their experiences mystics leave behind their usual ways of experiencing and being: a leaving behind that is necessary if room is to be made for the state that follows. Viewing this firstly in terms of emptying, Lewis uses an unusual analogy: ‘If wine-glasses were conscious, I suppose that being emptied would be the same experience for each, even if some were to remain empty and some to be filled with wine and some broken.’ Following this with a very this-worldly analogy – that of embarking on a sea voyage –  he considers the related motif of departure: ‘All who leave the land and put to sea will ‘find the same things’ – the land sinking below the horizon, the gulls dropping behind, the salty breeze. Tourists, merchants, sailors, pirates, missionaries – it’s all one.’ Thus, as with emptyings, departures may easily be seen to share things in common. The crucial point for our bridge-building is the assertion that follows. ‘But’, he adds, ‘this identical experience vouches for nothing about the utility or unlawfulness or final event of their voyages…’

This final set of assertions is key. On the one hand, for Lewis, the reality of mystical experience implies nothing regarding the usefulness or rightness of mystical practice itself. Neither does it say anything about the sanctity of the mystic. For those things, something else is required. But this need not detain us, because more important for our exercise in bridge-building is Lewis’s assertion that emptyings, and especially departures, must not be confused with destinations. Hence, and again addressing mysticism, he writes: ‘I do not at all regard mystical experience as an illusion. I think it shows that there is a way to go, before death, out of what may be called ‘this world’ – out of the stage set. Out of this; but into what?’ It is the into what that is key. Departures may indeed share things in common, Lewis is saying, but this tells us nothing about what awaits at the end of each respective mystical journey once ‘this world’ has been left behind.

It is at this point that the relevance of Lewis’s insights into mysticism for the understanding of Near-Death Experiences will hopefully have begun to become clear. For surely, like the mystic, the Near-Death Experiencer has in some sense(s) embarked on a process of departing. Hence, just as the mystic ‘traveller’ is engaged in a journey which entails the leaving behind of any ‘normal’ sense of ‘spatial and temporal consciousness’, so, too, the Near-Death ‘traveller.’ How could it be otherwise, in a situation where the body’s various systems and sub-systems have begun to shut down? We could hardly expect the continuation of ‘ordinary’ states of consciousness in such circumstances: a fact to which Near-Death Experiencers’ testimonies amply attest.

Indeed, we might even see this ‘shutting down’ process as in some sense(s) akin to emptying – a topic for another paper, perhaps – but it is the leaving behind process that I want to stay with here. For, just as Lewis reminds us that all departures bear ‘family resemblances’, so too might we expect the departures which Near-Death Experiencers have begun to undertake. And this is what we do, indeed, find: as the recurrent features within Near-Death testimonies of tunnels, lights, life reviews, and so on clearly show.

But surely, objects the sceptic, these are just ‘tricks’ of the brain? For Lewis, this is to miss the point; certainly as regards mysticism. Hence, he writes: ‘I shouldn’t be at all disturbed if it could be shown that a diabolical mysticism, or drugs, produced experiences indistinguishable (by introspection) from those of the great Christian mystics. Departures are all alike; it is the landfall that crowns the voyage.’

And herein lies the crux of the whole matter for our present purposes. Whatever the processes that may be occurring in a dying brain, these tell us nothing about where the Near-Death Experiencer actually goes. That is hidden: up ahead, around the corner, over the brow of the hill, out of sight. Such an assertion is in no sense intended to denigrate the experiences of those who have embarked on their voyages, only to (temporarily) return. Far from it: according to the very many accounts of Near-Death Experiencers, the emptying involved in the setting-out is wonderful; the departure both blissful and thrilling. Should God, in His grace, have afforded His creatures such experiences as they leave His world, I wouldn’t be at all surprised. But up ahead: something infinitely greater still. A landfall that none has seen. A crowning of the voyage unfathomably wonderful.

I like to think that had Lewis directly addressed what we now know as ‘Near-Death Experiences’, he might have said something like I have suggested here. His meditations on mysticism in Prayer: Letters To Malcolm hint in this direction, and I hope that I have done enough to show their relevance, at least. It is one thing to examine a dying brain and find evidence of particular activity within it, quite another to ponder the unimaginable reality when that activity finally ceases and dying ends. No ECG can tell us anything of what awaits on the other side of death. No brain scan ever, possibly, could.