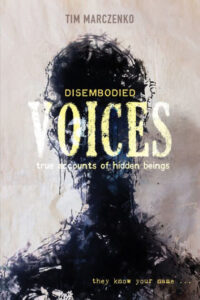 With a few notable exceptions, such as the so-called ‘Electronic Voice Phenomena’ recorded on tape by Friedrich Jurgenson and others, our only sources for curious instances of disembodied voices are the testimonies of those who claim to have heard them. Marczenko presents his own at the very beginning of his study: an extremely odd account in which somebody – or something – called his name and attempted to lure him into a nearby forest when, as a twelve year-old, he was practicing basketball outside his home.

Before I started his book, I thought it was going to be much like other overviews of the field, such as Rodney Davies’ own Disembodied Voices which remains a classic over twenty years after its initial publication. It certainly is that, but rather more besides, for as Marczenko’s study unfolds so too does his thesis develop: the voices – which frequently emanate from woods, rocks, masks and other odd and unlikely places – act as lures and traps, mimicking human voices in order to lure the unwary away from safe places such as homes and well-worn trails and into wildernesses from which they often never reappear. To this extent, his book acts as a kind of ‘bridge’: linking the odd phenomenon of voices with no obviously human speakers on the one hand with the burgeoning literature of missing persons on the other. As regards the latter, I’m thinking in particular of the ‘Missing 411’ books popularised by David Paulides and others. These present a consistent mystery: why do experienced hikers do inexplicable things in lonely places such as US National Parks? In particular, why do they so often leave the safety of the trail? It’s rule number one of hiking, as every experienced hiker knows: never leave the trail! Yet many seem to: including those who really did know better. Marczenko’s study presents a possible answer to this puzzle: a voice, mimicking a human voice, calls to them from the wilderness and, essentially, lures them away. We know this thanks to the testimonies of those that heard the voices and, for whatever reason, managed to resist. Herein lies the originality of his book, elevating it above a ‘mere’ overview of such phenomena historically and cross-culturally – something it does splendidly – and ensuring that it will remain an important source of reference for some time to come.

Quite apart from its originality, Tim Marczenko’s study is also one of the best-presented books I’ve seen for quite a while. A handful of typos let it down a little, but credit must still go to Schiffer Publishing – I hadn’t heard of them either – for a superb hardback: well-made, beautifully-finished, and fronted by a striking cover. It even came complete with a laminated bookmark. In these days of e-books and other downloads, it’s easy to forget the pleasure that comes from the feel of a quality book in the hand and this one provided a welcome reminder of that.